Here’s a demo of the finished system:

In the end, it all turned out really well. Painting it white and using a white print stand was a good insight, the light reflects around the box pretty well for how few LEDs are in use.

The software flow chart has changed slightly. I removed the speaker as it wasn’t loud enough and added software debouching for the pushbutton interrupt service routine. Here’s that most recent version:

The interesting parts of the code are the cookResin function as well as the main loop of the Arduino:

Again, this all should all be explained by the flow chart. The full source can be found at the bottom of this post.

The circuit schematic hasn’t changed at all since this post, here’s a fritzing of what’s going on: 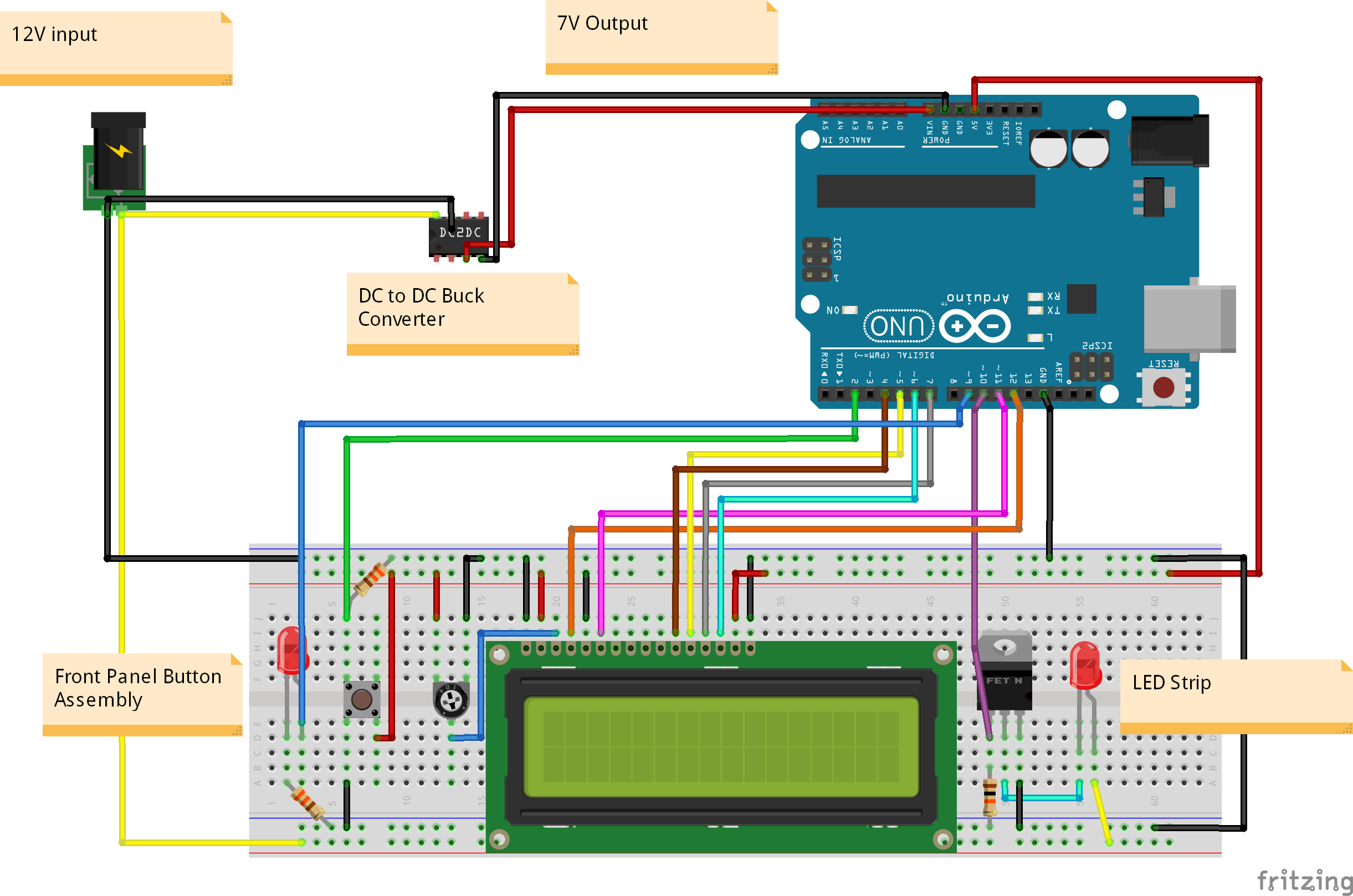 Super simple, basically a screen and a button. The parts to make this are here:

Assembly is super straight forward, if you’re trying to build one and have any questions, let me know!

All of the files necessary to make this project can be found here. 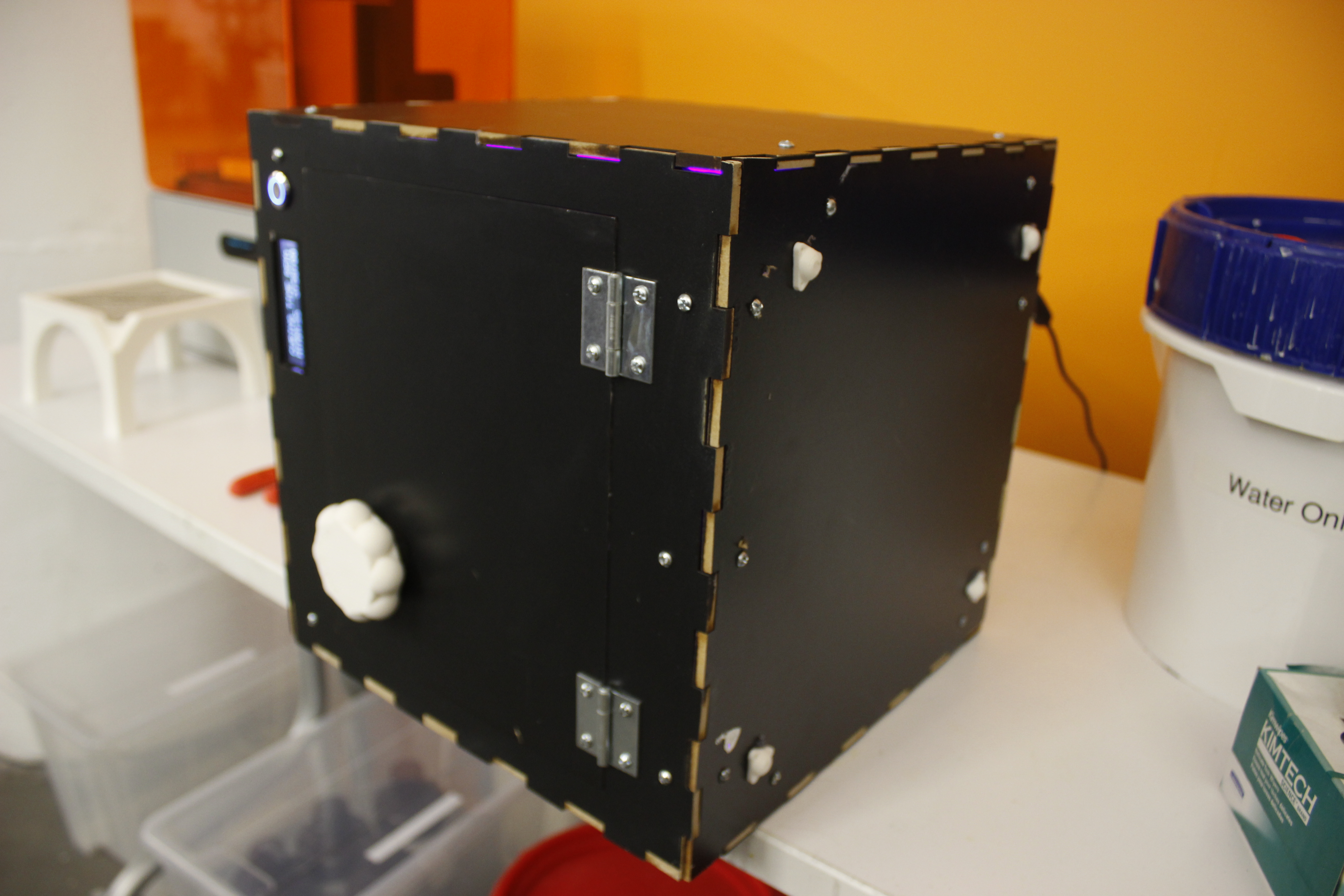 This project is the first of what I hope to be many in collaboration with the MADE@MassChallenge Hardware lab. The primary goal of this project is to speed up the time to delivery on prints coming out of the Formlabs Form 1+ SLA 3D printer using UV LEDS. Here’s a proof of concept of my circuit:

One of my tasks during my internship at MassChallenge was managing the queue of incoming models to be 3D printed on our 3D printers. Turnaround is often a pressing issue when doing this. It was often the case that teams had a deadlines or presentations that they needed parts for. Shaving even minutes off of the time from submission to receiving a fully processed part mattered quite a bit.

The Form 1+ is an amazing printer. If used correctly, the print quality can be much higher than the other 3D printer in MADE, a uPrint SE Plus by Stratysis; a printer almost 5 times the cost.

The post processing involved with the Formlabs has a steeper of a learning curve and leaves a lot of room for possibly destroying a part in the process.

The problem is not a fault of Formlabs, but rather a problem in the chemistry behind the resins used to create the parts. They are photopolymers, and need UV light to be cured. It is suggested that this be done through exposure to sunlight, but that takes quite a long time. I also have a sneaking suspicion that there are adverse effects of doing this, but I can’t prove any of that as of now but hopefully more on that later.

As this is a project that will be used by people other than myself, it is worth it to commit time and effort into the user experience. Atheistic should also be taken into account as this has to stand up next to the beautiful design of the Form1+. In short, a UV LED strand, a 3A switch, a power supply and a Light tight box could functionally do the trick, but in this case a polished design is as important as the functionality.

At this point, a push button switch, a rocker switch and a 16×2 Character LCD will be the UI. The software flow is as follows:

I’ll post the final code when I finish, but this chart is basically what the code running in the above video looks like.

Thanks for reading, more on the physical construction in the next post.